About a month into counseling and Jeff’s deployment, my girls and I joined my family to visit my sister, Brittany, who had recently move to Arkansas. Her job as a college tutor somehow landed her living with the Duggars from “19 And Counting.” While I was excited and anxious to see my sister in her new setting, traveling with bulimia otherwise brought its own challenges.

Keeping faithful to my counseling homework, I brought along my food journal. Whenever I did not know if I would have control over food portions or rooming accommodations (i.e. purging options), I was particularly vigilant about bringing my own food. I packed my cooler full of apples, protein shakes and bars, carefully placing the girls snacks on top, so as not to draw attention. I even brought those snacks along with me into the fast food restaurants. I tried to act like it wasn’t a big deal that I was eating my protein bar at Burger King, but in reality I felt like the word “failure” was flashing across my forehead.

But no price was too high to do what my “bulimia god” required. Scenarios where purging was not a guarantee were always the ones where I felt the most hungry. I had to deprive myself of food in order not to be anxious about finding a place to purge. And, on top of that, the problem was only exacerbated by the fact that I was constantly second-guessing about whether or not I was producing enough milk for Haddie, who was solely nursing at the time. My heart hurts to think of the sorrow I brought to my family during that trip over mealtimes. I tried “comforting” them by acting like I did not have a big appetite.

As we pulled up to the double gates of the Duggars’ driveway, we were greeted by Brittany and a lot of Duggar kids who were holding up multiple handmade signs, such as “Welcome Crist Family!” As we continued driving down their long driveway, they all ran on ahead shouting, laughing, and leading the way. We had a lovely afternoon talking with the older girls and playing volleyball, and it wasn’t until later on that night that one of the most significant moments for me during my battle with bulimia took place.

After dinner, Mr. Duggar gathered us all into the main living area. It was time for family devotions, and it was very special to be ushered into their nightly routine, especially as it pertained to seeing how much Brittany had become part of their family. Mr. Duggar began by saying they would show a clip as an introduction to devotions that night. It was the “Stop it!” clip by Bob Newhart. At the opening scene, I already started to blush. The skit consisted of a counselor and his patient, and with every issue that is brought up by the patient, the counselor would respond with the same solution every time, “Stop it!”

The whole counseling thing was a bit too real for me at that time. I remember holding Haddie and “getting up to bounce her in the back.” Of course, everyone was getting a good laugh out of it all. And I understood that. It was truly funny. But then, watching it in the Duggars’ living room, I was caught off guard as the patient in the skit specifically says, “I’m bulimic. I stick my fingers down my throat.” I remember clutching Haddie even harder. My cheeks burned. The counselor again says, “Stop it!” Everyone laughed. I shrunk back even further. I walked back toward their kitchen table.

When the skit was over, Mr. Duggar stood up in front of everyone and began his talk about sin, and how it was true that when it came to sin we needed to “Stop it!” I tried blinking fast enough to kept tears from spilling over onto my cheeks. I remember looking at the older Duggar children, wondering if I could detect on their faces any hint of the despair that I so deeply felt. “Just stopping it” had not worked for me, and the law had never weighed so heavily on my heart as it did during those devotions that night. That law, I could not do. I had tried and failed. But so very soon, my friends, would I taste the joyous freedom that JESUS did what the law could not do. Jesus ate perfectly for me. Jesus had a perfect relationship with food. Jesus fulfilled the law.

Jesus died precisely because we can’t “Stop it!” 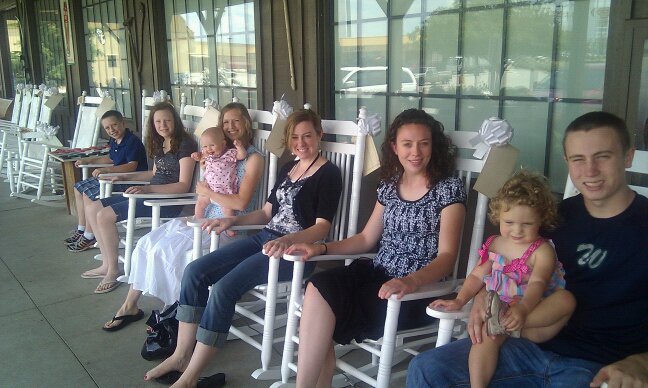 3 thoughts on “Aubrey’s Story #16: Bulimia and the Duggars”