When our daughter was about nine months old, my husband and I drove out to Ft. Jackson, SC for Chaplain’s School, and so our Army adventure began. As we entered our little apartment where we would live for the next three months, I saw my chance at a new beginning. This kitchen would never see me purge. But it was not long before I had eaten the entire cake that a dear, fellow chaplain’s wife had brought over, and I was at it again. There were layers of wounds that I inflicted on my husband by doing such things as eating an entire cake. The obvious was that He was never able to enjoy a piece. But it went deeper. He was never able to enjoy a piece with me. He was never able to thank the lovely wife who had made it for us.

There was never a more perfect example of how I robbed from Jeff than our anniversary cake. A few months after our wedding, I ate all the freezer-preserved leftovers from our wedding cake. Like many couples, we actually never ate the cake at our wedding, and so, ever since our wedding, Jeff was always talking about, “when we could finally enjoy our wedding cake together!” When he mentioned it sometime after I had consumed it all in one sitting, I harshly told him it had gotten freezer burned, so I threw it all away. While doing my best to come across calloused, my face ached with grief. I was not just stealing joy from myself, but from everyone around me.

With all the hardship, Army life settled into a happy rhythm of walking with my little girl, Aletheia, to the library in the mornings, having lunch with Jeff and naps in the afternoon, and then playing at a playground while we waited for Jeff to come home for the night. I loved how Aletheia became familiar with the regular bugle calls. We also took advantage of the lovey South Carolina “fall” weather and walked almost nightly as well.

And then another glimmer of hope to stop purging presented itself when I found out I was pregnant. Of course, I stopped purging for a few days, and then, it was the same old story. I was less concerned about purging during this pregnancy, as Aletheia had survived just fine. Miscarriage was never really something on my radar. My mom had never miscarried, and there were six of us. So even as the ultrasound technician went to go find the doctor to continue the search on the ultrasound, I really did not think twice about it. Then the doctor said, “There is something wrong with the baby. It does not have a heart beat.” I was 9 weeks. My thoughts could not go beyond the horror of wondering whether my purging had done it. This was my fault! And the burden would be mine alone to bear.

We were moving in a few days to Ft. Bragg, and so the doctor thought it best to schedule a DNC within the next two days. Trying to contain my sobs by wrapping my arms closer around my chest, I walked back to another office where I would schedule the procedure. I sat down in the chair offered and did my best to answer the questions asked. I am quite sure that in my emotional state that I would never have noticed what song was playing on the radio at that time in the office. But I did. Christmas was only a couple weeks away, and so it was naturally a Christmas song. And as bizarre as it sounds, the song that ministered to me in that moment was “The Hallelujah Chorus.” I tasted deeply of His goodness in that moment. In that moment of death to dreams, and hope, and the stopping of a heartbeat, I needed to hear those words. It was His bitter-tasting mercies. In the midst of weeping over what I thought I had done, in the moment of tasting death, “the Lord God omnipotent reigneth!”

Upon waking from the procedure, I remember, with difficulty, shakily asking the nurse who was in the curtained section with me, “Is the baby gone?” “Yes,” she replied gently, and my baby was gone. The Lord gave, and the Lord took away. Even if it was by my own hand that the little one’s heartbeat had beat its last, He still reigned, and one day I would be side by side with that baby, looking into the face our Everlasting Father.

One would think Bulimia would come to an end there for me. But it didn’t. I found myself the next day, hours before the Chaplain’s Graduation Ball, heaving into a bowl in our bedroom. The Lord had another journey for me to take. Another bitter mercy was coming. How good and patient is our Father, my friends?! I can’t help but write this now with tears in my eyes. He was so, so patient with me. Jeff was so patient with me. There I was, still bleeding from my procedure, hearing the laughter and joy of Jeff, his parents (who had come for graduation) and Aletheia celebrating Jeff’s graduation in the other room, while soothing my own aching heart in a bowl of puke. But they loved me. They too, waited patiently. And I received grace upon grace from them. I came out of the bedroom, having cleaned myself, and hidden my bowl, dressed for the “ball.” And Jeff’s mom said I looked beautiful. I don’t know what she knew in that moment. I don’t know if I looked like a dinosaur trying to hide behind a streetlight. But she loved me. And Jeff loved me. 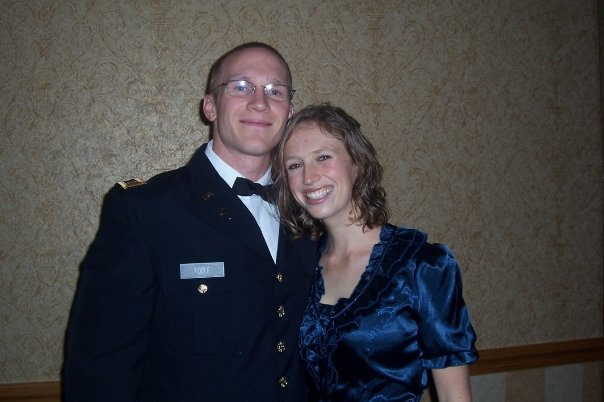 If you find yourself in an hour of darkness, or confronted with an ache too deep for words, maybe listen to the Hallelujah Chorus. Let its words of truth, love, and majesty break over your head. The words will sting your wounds for a moment, but they are healing words. They are words that will lift our gaze higher. And in the deep valley, we will know that whatever comes our way…these truths remain…

“And He shall reign forever and ever,

King of kings! And Lord of lords!

And He shall reign forever and ever,

King of kings! And Lord of lords!